One of the most important reasons people join a church is for the community it provides.  In some ways, it is the community which defines who we are as a religious people.  I believe in a proactive approach to building relationships within the church. Since I was a boy, I have been building; tree houses, decks, real houses, a family and churches.  Who I am and the minister I have become I first learned in building and those lessons inform my ministry today. I believe that transformations can happen and that seemingly-impossible visions can be brought to life.

Having grown through the transitions of pastoral size to smaller mid-size to large mid-size I have learned a great deal about growing a community.  As a minister I understand that creating connections between groups of people is vital to congregational health.  In the UU Congregation of Frederick (MD), I worked to establish small groups who to this day continue to meet regularly for fellowship and pastoral support.  These were later augmented by covenant groups committed to spiritual growth and shared leadership.  In my current congregation, we established an active small group ministry task force with the goal of including half the congregation in small covenant groups by the end of 2009, our first four year strategic plan target.  The responsibility for small group ministry has shifted to our Director of Congregational Advancement. We currently have about 35 % of our congregation in these groups.

A very large part of my building community experience was the very real job of actually building and renovating the churches I have served.  I have been involved in three church renovations projects and one completely new church building program.  After coming to Frederick in 1994 I realized they had outgrown their modest building already at two services.  Over the next seven years I nurtured the process by which they planned, discussed and raised the money to build their present facility.  I made use of outside consultants to help with the vision, planning studies and capital campaigns that go into such a large project.  Their new 11,000 square foot building opened in 2003.

Since being here at Pacific Unitarian Church we have completed two renovation projects and in our current five year strategic plan we are exploring how to meet the space needs of this growing congregation.  Included in that discussion is the possibility of establishing another site; an idea I have been studying for years.  Regardless of my plans, I believe in equipping a congregation with the vision and plan to move forward. 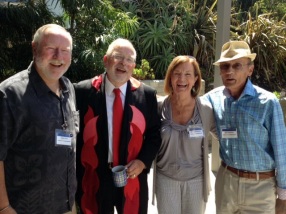 While the growing of a community is not an end in and of itself, it is the by-product of a church that is doing well.  I and my present congregation were honored to have been selected as a “Breakthrough Congregation” by the UUA in 2008.  That breakthrough was the result of a transformation in attitudes and practices that were attractive and sustaining.  We never set out to “grow”; we grew because we were building community behind a compelling vision, with excellent services and organization.

I have come to appreciate the importance of building community across generations and between those who enter the church from different places.  I have developed a special skill set in this regard and would work closely with membership volunteers and staff to be certain people feel welcome and included in the life of the congregation.  I am fiercely committed to welcoming all people regardless of gender identity, age, race, class, belief, sexual orientation, ethnicity and language.  While my present  church is not bi-lingual we are laying the foundation to become so in the future.  Signing for the deaf is also a future goal.

Conflict is inevitable in any community. I have come to believe that conflict, when managed properly, can be healthy. I have worked through several conflicts, some quite serious, in my current ministry. I believe I have a special skill set in managing conflict which leads to healthy boundaries and congregational health. I am aware of the principles involved in fostering a healthy congregation including the necessity of forming a trusted right relations team and having policies in place that ensure safety and deal with disruptive behavior.

Celebrating with people as often as possible, especially across generations has been one of the most important community building activities a congregation can institute.  Celebrating our life together, even as we work to change the world, helps us grow as people and as congregations.